Extender for Jira is one of those applications after which admin`s life will never be the same. Why? When we count how much time we lost so far on activities that this add-on does for us, we will know the answer. Here is a review of this plugin. And a contest. Enjoy!

Extender for Jira (or E4J) is an application that increases the comfort of the administrator’s work (although some would even say that the quality of his life). It is a set of tools that allows you to quickly configure a workflow, create documentation or diagnose a problem with permissions. It sounds trivial, but wait, there is more. And there will also be a contest, so stay with me till the end.

The plugin was released in 2007 by it.Lab and has not yet gained true popularity, which is surprising considering the functions it offers. Perhaps because it is an add-on strictly for administrators. This means that it has no direct impact on users’ work. And perhaps it makes it more difficult to justify the purchase of a license. Although as you know, a happy administrator is a happy Jira. The application supports Jira Server and Data Center versions and is constantly updated.

Let’s take a look at its three main elements.

Workflow editing support is the main feature of E4J. Let’s start with the fact that we can go to the administrator view from the task level. 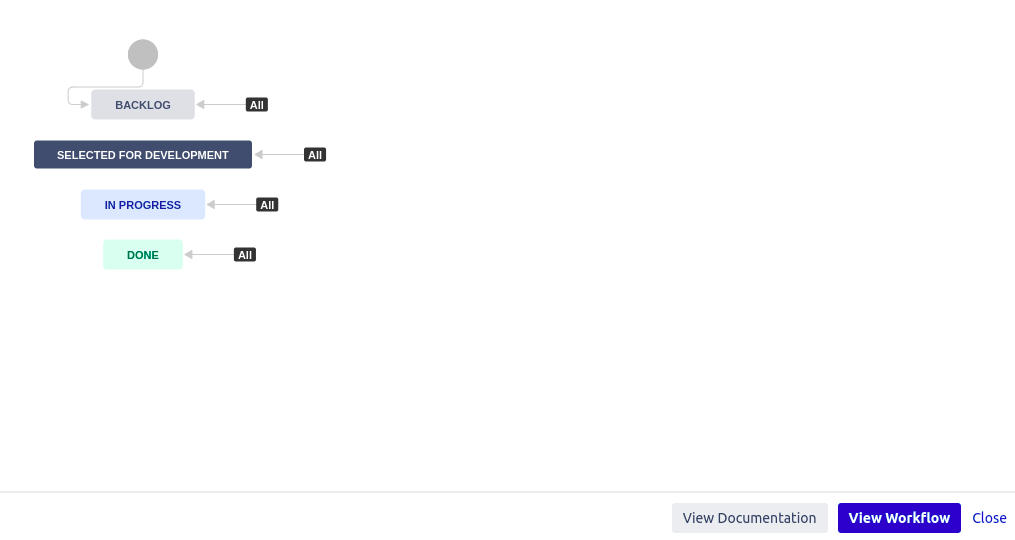 There is one more magic button, but more on that later. And what do we see now? In addition to a more transparent layout, we get e.g. the ability to preview all transition features without having to edit it. This reduces the time needed to get this info by at least half. There are also a few other options here, but let’s not wait any longer and move on to editing the workflow, and more specifically to the transition view, which in my opinion is the creme de la creme of this add-on. Let the graphic speak for itself:

We have a whole range of options here that seem to have been available in Jira for a long time. For example such a useful thing as temporarily disabling a condition, validator or postfunction. Next – drag and drop individual elements. Simple? Simple! Now, attention – we can export selected elements to a file and import them to another instance. This has always been a problem for me when migrating between instances – the need to recreate workflows function by function. Those times are over.

However, if you have your favorite solutions that you use on many workflows, there is an option to add them to the library. Each of the workflow features has its own library that you can develop. Interestingly, if there are more functions, you can group them into a template. just look:

With a template, we can do the same as with a single function, i.e. clone, temporarily disable, export or … add to the library. And use later. Balm to my admin`s heart.

Not to mention a small but important improvement: showing the name of the add-on from which the function is derived. This list is visible on the function adding screen.

Ideally, such information should also be included on the transition editing screen.

Have you already wondered what the magic button I wrote about above is for? I mean view documentation. This is a gamechanger. One click and we get the entire documentation of a given workflow. With all the details down to the transition/status properties. Generating such a document takes less than one second. It looks like this: 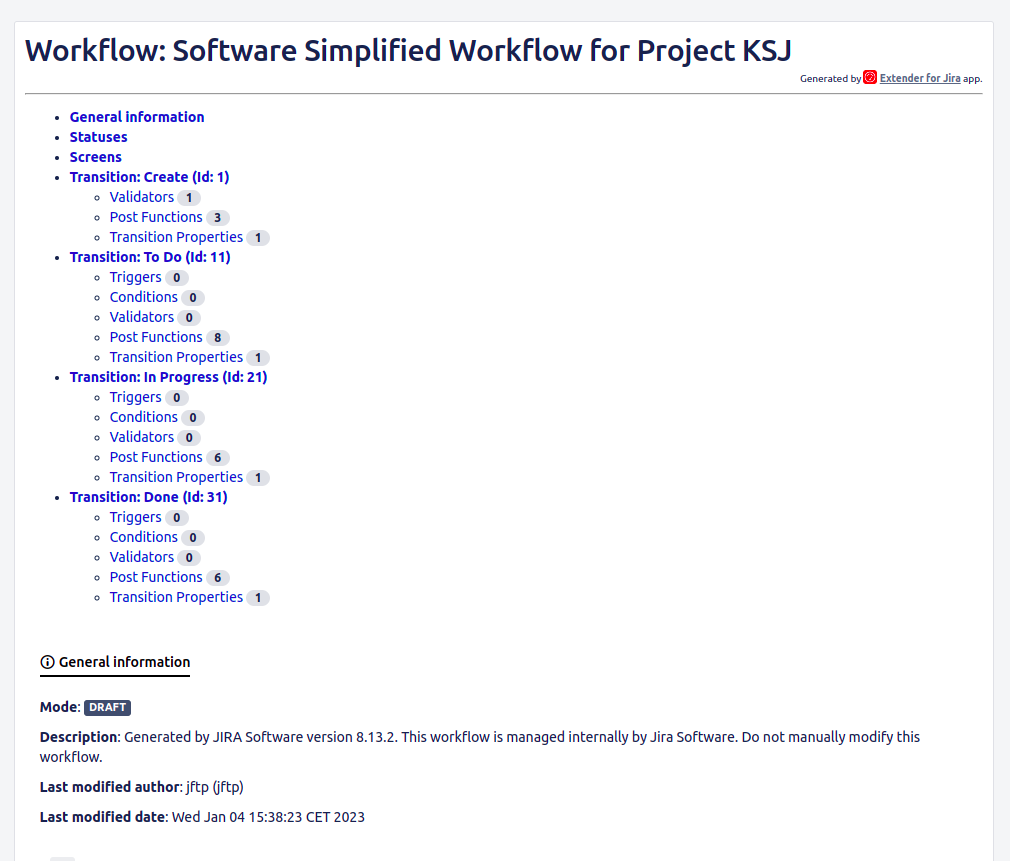 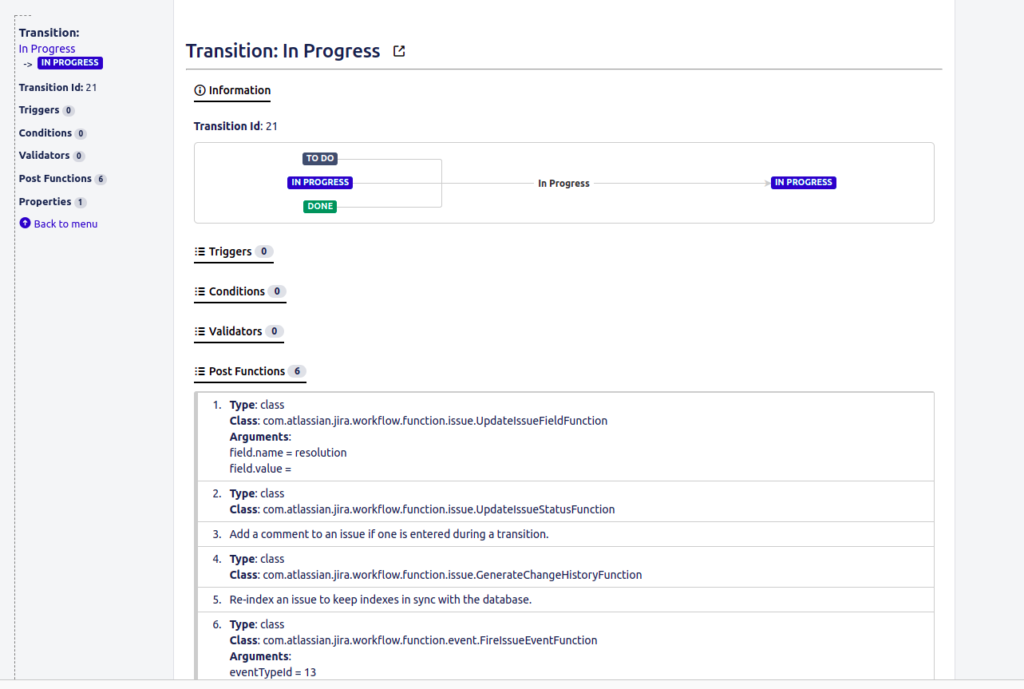 Now calculate how long it would take to gather this information manually. Ready? I am waiting.

Now add the entire project configuration to this. By the time you read this sentence, it`s already done. The document can be exported to pdf or jpg or … to Confluence.

Do you know Jira Helpers? If not, I invite you to read the article on this subject. As a reminder, these are functions that allow you to quickly check permissions or notifications for a given user. E4J adds a few more “helpers” to this set.

While in the previous paragraphs I described the functions quite cross-sectionally (I encourage you to explore the documentation), here I will show you all four options. They are worth it, thanks to them you will save a lot of time.

Actually, I should have left it for the end, preceeding its introduction with the sounds of a rising snare, but what the heck! If you code in Jira, you definitely use
field id`s. Who has a good way to check these numbers? I have several: database, custom field section, development tools in the browser. None is perfect. Here, however, we get everything on a platter: project id, issuetype id, fields, and even id`s of their values.

Want to check if a given user has access to all transitions on the workflow? There are at least three traditional ways: checking the workflow configuration, relogging to such user or… asking him a question. In E4J, as in Jira’s native “helpers”, we only need to select user and the rest happens by itself.

I already used this feature while writing this article. I wanted to add a field to the screen of the task I was on. Instead of searching in the project configuration, I have a list of all schemes in one place, with the option of quickly going to each of them.

The last of the four helpers can indicate fields that have some value for a given task but have been hidden for some reason. We can find out what these fields are and how they are hidden.

There is one more feature of the E4J that cannot be overlooked. This add-on LIVES. Just check its version history to see that updates appear even several times a month. I’ll tell you why. The author listens to his users. Changes are tested by a group of experienced administrators before each implementation, and decisions regarding the development of the add-on are made based on feedback. A healthy situation, isn’t it?

The more I wonder why I reached for this plugin so late. Anyway, I think I know why. Like any administrator, I get into a rut sometimes, and if I learn to do some manual tasks fast enough, I don’t bother to automate or simplify them. That’s what I had with editing workflows, which, as you know, can be a tedious job. But when I saw the list of additional features that appear immediately after installing the add-on, I had the impression that they had been there forever. As if the workflows had been working in the trial version so far and suddenly someone unlocked this limitation.

Exactly one year ago, the E4J add-on was reviewed by Rodney “The Jira Guy” Nissen on his blog. Since then, the app has had about 40 updates. But apart from the version, the price has also gone up – for the package I am interested in (2000 users) it is a double change ($1100 -> $2300). Although you have to take into account that the prices of all add-ons have increased recently due to Atlassian’s moves.

In fact, if I were to advertise this add-on, I should go directly to the business (or any other group that decides on the app’s budget). So if you’re in this group, listen carefully: your admin’s comfort is your comfort. Faster execution of tasks, greater resistance to errors, easier onboarding of new admins, easier migration – these are just some of the effects that can be noticed after using E4J.

it.Lab and JiraForThePeople have 10 discount codes (-25%) for Extender for Jira! How to get them? There are three easy steps to take:

1. Sign up for the free Jira School newsletter HERE

Prizes will be awarded to randomly selected participants on Thursday 12.01. Good luck!